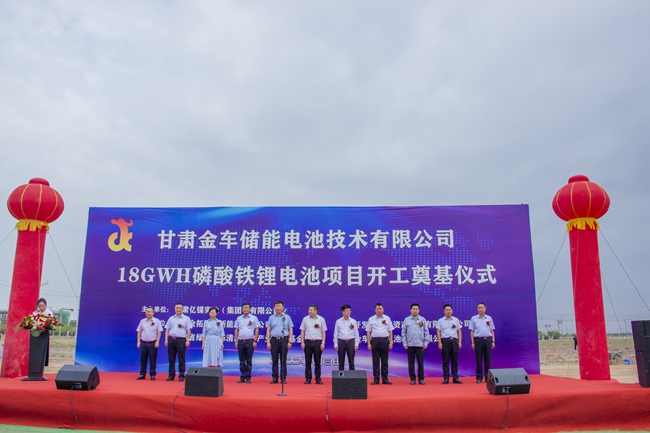 Gansu Jinche Energy Storage Battery Technology Co. Ltd. announced on September 12, 2021, that it will set up an LFP battery manufacturing project in China’s Gansu Province. The project will be located in the province’s Jinchang Economic and Technological Development Zone (ETDZ) and have a production capacity of 18GWh per year. Now, after a year since the announcement, there is some news about the latest progress in the implementation of the project.

A recent post from the WeChat account of the Jinchang EDTZ stated that Jinche held a formal inauguration ceremony for the project on August 3. According to the reporting from local news media, Jinche was established in July 2021. It is a holding subsidiary of Gansu Jintou Lithium Battery New Energy Co. Ltd., which in turn is a wholly-owned subsidiary of a Chinese company that is involved in the nickel market. Jintou also has a 20GWh project for the manufacturing of prismatic LFP batteries.

Jinche’s project is being developed in two phases. The amounts invested in the first phase and the second phase come to RMB 1 billion and RMB 6 billion respectively. The construction of the first phase commenced this March. The first phase is scheduled to enter operation near the end of this year. Spanning an area of 327 mu, the 18GWh project comprises production lines for LFP batteries and supporting facility infrastructure. The whole project is expected to be completed by the end of 2023.

Jinche said that it is one of the first companies from Gansu that is involved in the manufacturing of equipment related to solar energy, wind energy, and energy storage. As for its next steps, the company plans to establish a provincial-level center for the R&D of energy storage technologies. The center will pursue innovations in three major areas: battery materials, battery chemistry, and product design. The company will expand its IP portfolio and use it to improve the performance of batteries with respect to cycle life, energy density, and safety. At the same time, the company will put efforts into the acceleration of the commercialization and mass production of new types of batteries (e.g., Na-ion batteries, semi-solid-state batteries, and all-solid-state batteries). Ultimately, Jinche aims to build and sell first-class products.

Jintou also has an extensive line-up for Li-ion battery products, offering up to 60-plus model numbers. Hence, it has the most comprehensive Li-ion battery portfolio in the industry.The company has solutions for a wide range of applications (e.g., NEVs, digital cameras, laptop computers, backup power supply, portable power supply, GPS, and other electronics and e-mobility hardware).

Jintou is also setting up an independent R&D center. However, this center will also draw resources from other academic research institutions in China, including the Changchun Institute of Applied Chemistry (that is under the Chinese Academy of Sciences), Shenzhen University, and Central South University. Furthermore, Jintou’s R&D center will have post-doctoral positions that are specially approved by the Chinese government. Once up and running, Jintou’s R&D center will focus on developing patented technologies related to ionic liquid lithium batteries, polymer lithium batteries, and LFP batteries used in NEVs.