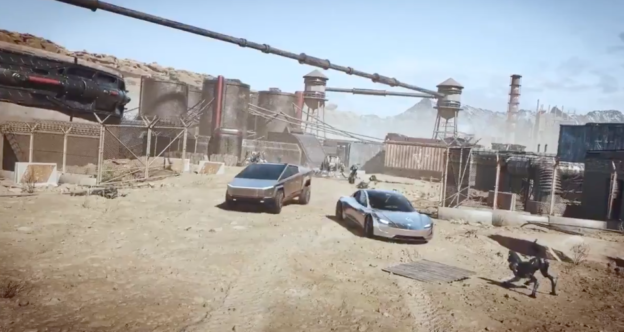 The spotlight in the EV market is fixated on whether Tesla’s Cybertruck can successfully enter mass production by the end of the year. At any rate, one might not need to wait until then for a firsthand driving experience, if the Chinese iteration of PUBG, Game for Peace (or Peacekeeper Elite in some translations), is any indication.

Furthermore, the footage gave special focus to Cybertruck’s military-styled tires. The towing hook, an indispensable part of any pickup trucks, naturally became a key weapon of Cybertruck. In comparison, not very many details were shown of the Roadster 2.0.

Although Tencent did not indicate whether players will get to drive the two vehicles in the new game, prior evidence points to their availability. For instance, Game for Peace collaborated with Maserati in 2020 by releasing three Maserati vehicles for use in-game (via microtransaction, that is). According to Sina’s reports, players who were able to drive Maseratis in game spent an average of CN¥3,000 before being able to do so, thus making an in-game Maserati the symbol of the crass new rich.

The collaboration between Tesla and Tencent has inspired various automakers, with Chinese automakers gradually hoping to become part of the most popular game in China in order to raise their respective brand awareness. Despite Tesla’s prior insistence on eschewing advertisements, the company has been hard at work marketing itself to the Chinese audience after entering the Chinese market, although this aggression is limited to China exclusively, representing an interesting dynamic between Tesla’s domestic operations there and the rest of the world.