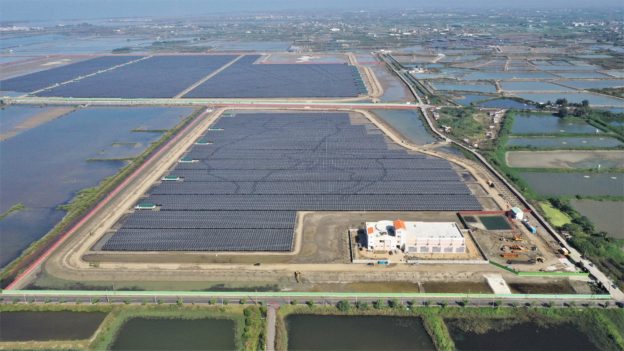 After completing the largest solar plant at 100MW in the Changhua Coastal Industrial Park back in 2019, TPC is optimistic about the average daylight of more than 2000 hours in Tainan, and further progressed the planning of solar system establishment in discarded salt fields during 2020. TPC commented that this project is ranked the 46th largest power plant in the world upon completion, and the company has worked with nearly 10 domestic equipment suppliers on building a “MIT Photovoltaic and Green Energy Industry Chain”, which provides Taiwan-made products from solar panels, cables and communication cables, support structures, and foundation piles, to inverters and step-up transformers that facilitate grid connections.

As pointed out by TPC, the salt field solar plant in Tainan was fully connected to the grid on September 14th 2020, and has generated 100 million kWh of electricity as of February 12th 2021, with an average daily electricity generation of approximately 615K kWh right now. The power plant has accumulated 120 million kWh of generated power as of March 30th, and is expected to exceed an annual generation of 200 million kWh after the official commencement, which provides the annual power consumption for roughly 57K households, as well as achieves 114K tons of carbon reduction.

TPC has invested NT$9.65 billion and applied more than 480K units of high-efficiency solar panels into this salt field solar plant measures at 214 hectares that is the equivalent to 300 soccer fields. Paired with the local salt marsh environment, as well as the two modes of ground and floating solar, the engineering adopted precast concrete foundation piles, which reduced the frequency of entries and exits of heavy vehicles and lowered the environmental impact. TPC also built roughly 40K units of foundation piles to elevate the solar panels 2.1m from the ground.

In terms of environmental protection, the power plant has avoided and preserved green belt spaces and habitat preserves for wild birds from being close to the national-level wetland, as well as established facilities such as trails and landscape platforms to maintain the existing function of flood detention. A 15MW energy storage system is installed next to the power plant that can store solar power during daytime, and supply power during nighttime when in need. TPC hopes to transform this salt field power plant into a comprehensive field that generates power, achieves energy management applications, as well as teaches environmental ecology.

Large solar projects have been continuously emerging in Taiwan over past several years, and are targeting various locations, including land used by the salt industry, areas with severe land subsidence, water space, and landfills. However, take the land used by the salt industry as an example, wild bird habitat hot spots and national-level wetlands must be avoided, and the power plant establishment must also take into account the environment that contains high humidity, high heat, strong wind, and high level of salt, which tests the performance and durability of the power equipment and solar modules.