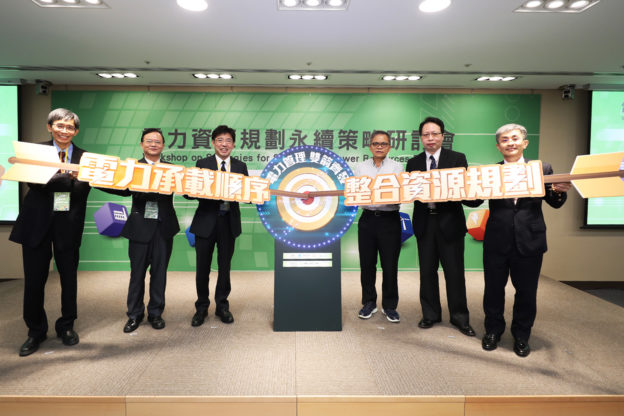 How does one stipulate a power usage plan that is most suitable with the current status and the future of Taiwan subsequent to the evaluation on costs and risks through the existing power resources? The Industrial Technology Research Institute (ITRI) hosted the Workshop on Strategies for Sustainable Power Resources Planning, and proposed the new concepts of Loading Order and Integrated Resource Plan (IRP) in the hope of establishing a more stable electricity environment.

According to the data of the ITRI, there are merely about 200 hours of relatively higher electrical load among the 8,000 or so hours in a year in Taiwan, and a proper management on peak electricity usage will be able to resolve all power issues in the existing phase. For that, the ITRI had invited experts from the industry, academia, and research sector to participate in the discussion on the maintenance of a stable power provision and environmentally friendly solutions, who also proposed the cogitation of a loading order in a power supply system, as well as the implementation of an integrated resource plan.

The so-called loading order of power refers to the priorities in seeking for solutions when the power system is encountered with power ascension and the various demand from the electrical load end, which consists of 3 foremost considerations, including demand response, energy conservation, and distributed generation. A substation or a new power plant may be considered in the planning should the three aforementioned items fail to conform to implementation.

The Integrated Resource Plan propels the loading order of power by executing an optimal integrated application of all power sources. Edwin Liu, President of ITRI, proposed an example, which compared the allocation and planning of resources to finance and investment, where one utilizes his/her own income for investment in time deposit, funds and stocks, or even real estates, and the so-called restriction refers to the obtainment of the highest return and revenue under restricted conditions, with insufficient funds in purchasing houses.

Liu Chi-wen, Director of the Office of Power Grid Management and Modernization Strategy, ITRI, believes that Taiwan must establish a long-term goal in energy development in the face of a demand for a stable power supply, and that is where the planning in resource integration comes in handy, as it is able to deploy early corresponding strategies by reviewing on potential future challenges. Chang Chien Le-ren, professor of the Department of Electrical Engineering at the National Cheng Kung University, also added that resource and power integration is currently on the rise. Power development, such as establishing new unit, had been the focus in the past, but the various availability of resources, including demand response, demand management, energy storage, and renewable energy, are no longer traditional characteristics of power, which must receive the most adequate planning in order to arrive at the optimal status that resembles investment portfolios.

As pointed out by Chang Chien Le-ren, the optimization, reinforcement, and expansion of power is formed by the construction of short, medium, and long-term power planning. For power optimization, a power grid is able to fulfil the rapidly elevated power usage during the peak hours by utilizing existing resources such as power dispatching, demand response, and energy storage, which must conform to requirements that include minimized costs and the least pollution. Reinforcement refers to the optimization of power infrastructures that will facilitate more power transmission, followed by the development and establishment of new power plants.

Chang Chien Le-ren added that general long-term power planning span across 20-30 years, for example, the observation on the possible power usage for 2040 must take place in 2020, before configuring the optimal power arrangement, and the intermediate procedures must also be gradually confirmed after the planning is complete since items planned over 20 years will not be altered or implemented instantly. Variables may occur during the process due to the external environment or political and economic situations, thus the planning requires to be updated every 2-3 years, which is exactly what happened at the workshop today.

The ITRI probed into the possible energy bundle for 2040 through a model analysis this year, for which the results indicate that the ratio of power generation using renewable energy must at least arrive at 42-51% in 2040 in order to satisfy the future energy and power demand, as well as achieve the target of carbon reduction at the same time. Hence, the approach in reinforcing the tenacity and the dispatch flexibility of the power grid through methods such as auxiliary services has become essential under substantial amount of grid-construction for renewable energy.