InterSolar Europe was hosted at Munich of Germany on May 11th, where Chinese module makers successively debuted their new products amidst bustling crowds. Europe is vigorously planning for renewable energy development recently due to the impact sustained from the Russia-Ukraine war. Statistics of customs indicate that China had exported more than 16GW of modules to Europe in the first quarter of 2022, and TrendForce’s projections denote that Europe is likely to arrive at 49GW of PV installations throughout 2022, which surpass the previous expectation by a great margin. Businesses have achieved exponential growth in profitability and thriving development since the start of this year amidst constantly rising polysilicon prices, while downstream cell businesses and module makers have been sustaining a heavy burden, with some of them experiencing an increase of revenue but zero increment in profit, while a segment of these businesses have even suffered losses. The allocation of profitability can be said as prominently differentiated within the industry. Upstream polysilicon businesses, despite incessant expansion, are cash-strapped in the face of such thriving market demand, with potential room for price increment, while the elevation of auxiliary material prices is also inflicting difficulties to module makers. Under such development, module prices are inevitable in inflation.

Polysilicon Prices to Continue to Climb amidst Supply and Demand Mismatches

Polysilicon prices have been continuously climbing since the start of this year, and are now gradually approaching the highest price in 2021 by having risen to RMB 259/ton in early May. The expanded capacity of polysilicon is steadily releasing, though the speed of release is not as efficient as expected, while imported polysilicon is slowly subsiding in volume due to overhaul and maintenance of overseas businesses and the pandemic, with a restricted level of provision under severe postponements. Downstream wafer businesses have elevated in the demand for polysilicon under expected demand and price increment, as well as their partial capacity that is progressively releasing, which resulted in an excess demand status for polysilicon that provides support for a constant increase in prices. Polysilicon had thus risen from an average price of RMB 87.75/ton in January 2021 to an average price of RMB 251.5/ton in April under an increase of 186% 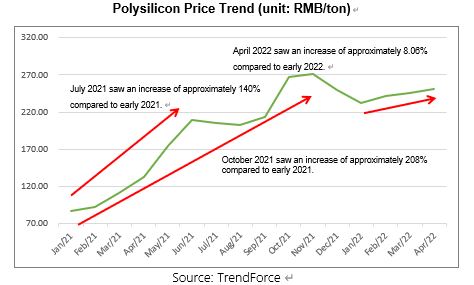 The inflation of polysilicon has led to price increment of various downstream segments. For the wafer end, the risen cost of silicon and the pandemic have obstructed production and delayed arrival schedules, and the tightened provision has bumped up the prices of M10 and G12 wafers to RMB 6.78/pc and RMB 9.05/pc under a respective YoY surge of 44.2% and 42.7%. The cell segment is largely following up with the inflation of wafers, where M10 and G12 have now climbed to RMB 1.16/W and RMB 1.17/W under a respective YoY growth of 29.2% and 28%.

Module prices are also exhibiting a rising trend, though the degree of increment is relatively small considering the acceptance of project providers. M10 and G12 modules had ascended to RMB 1.9/W and RMB 1.91/W under a respective YoY increase of 11.1% and 12.2%, which are far below the degree of inflation from the upstream sector, and have thus yielded severe pressure for module makers. 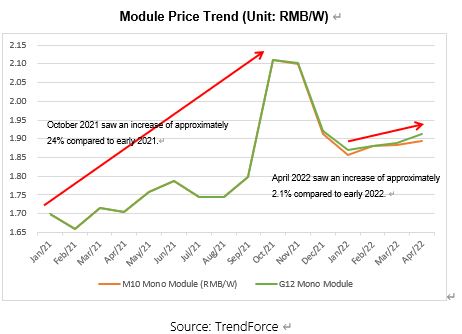 Price Trend of Various Segments of the Industry Chain 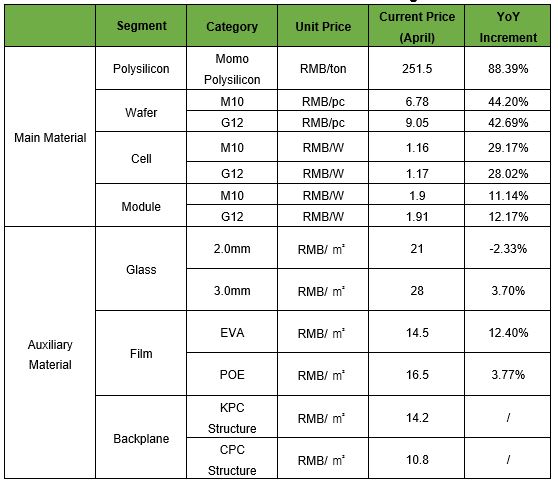 Module prices usually follow the rise of raw material cost, and that regular P-type modules possess heavier homogeneity, which explains the ferocious market competition and confined room for profitability. In addition, the production cost of modules has elevated significantly due to the risen prices of auxiliary prices such as glass, films, and backplanes, and modules are now constantly declining in profit margin. An indication on polysilicon and modules indicates that the former is currently sitting on a profit margin of more than 50%, with individual businesses approaching 70% and seizing most profits, while individual module makers are sitting at less than 20% in profit margin. According to the 2021 financial report of Risen Energy, the company only attained a profit margin of 1.13% for modules during 2021, which is a declination of nearly 8% compared to 9.11% in 2020, and clearly shows that the incessant surge of module production cost has considerably inhibited the degree of profitability.

Profit Margin for Partial Polysilicon Businesses and Module Makers in 2021 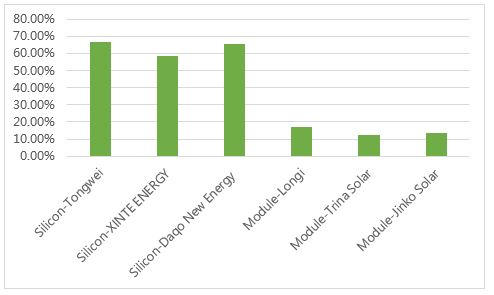 Various major central and state-owned enterprises had announced nearly 70GW of PV module tenders as of the end of April 2022, which exceeded the total scale of central procurement for 2021. Despite such enormous quantity and risen unit prices, most module makers are experiencing impedances in profitability upon easy revenue. According to the statistics of TrendForce, the average tender price of modules between January and April 2022 was at between RMB 1.86/W and RMB 1.90/W under gradually diminishing resources, with the highest tender price exceeding the RMB 2 threshold by having arrived at RMB 2.076/W. On the whole, the increase of module tender prices is regarded as insignificant compared to various upstream segments. 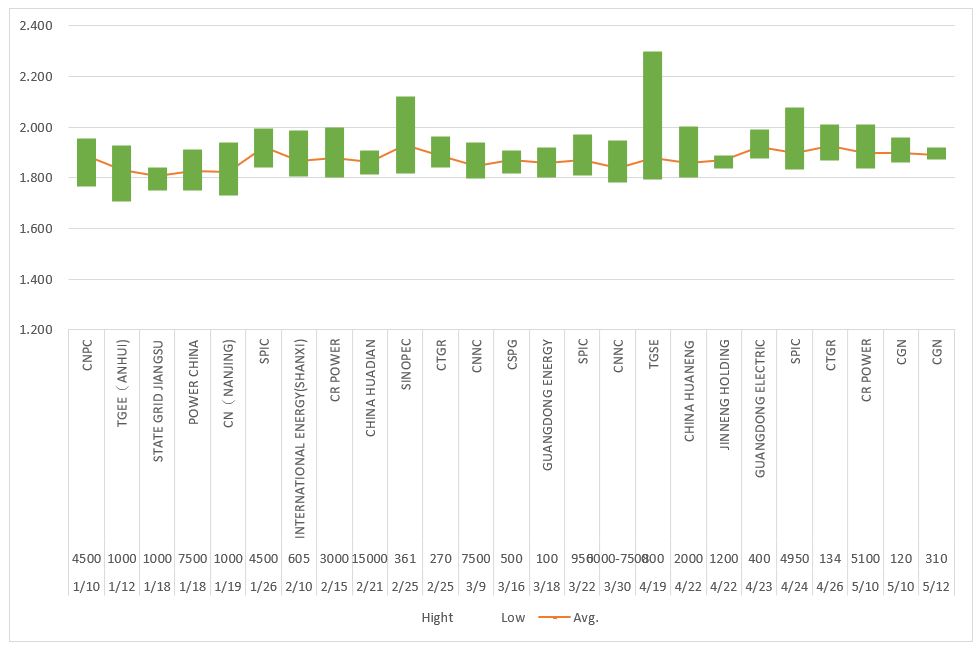 According to the estimation by PV Box, the cost per watt for modules has now risen to RMB 1.897/W when taking into account auxiliary materials such as films, frames, glasses, and backplanes, as well as under the premise of a cell price of RMB 1.17/W, which is less than RMB 0.02 in profitability per watt compared to the current module price of RMB 1.91/W. 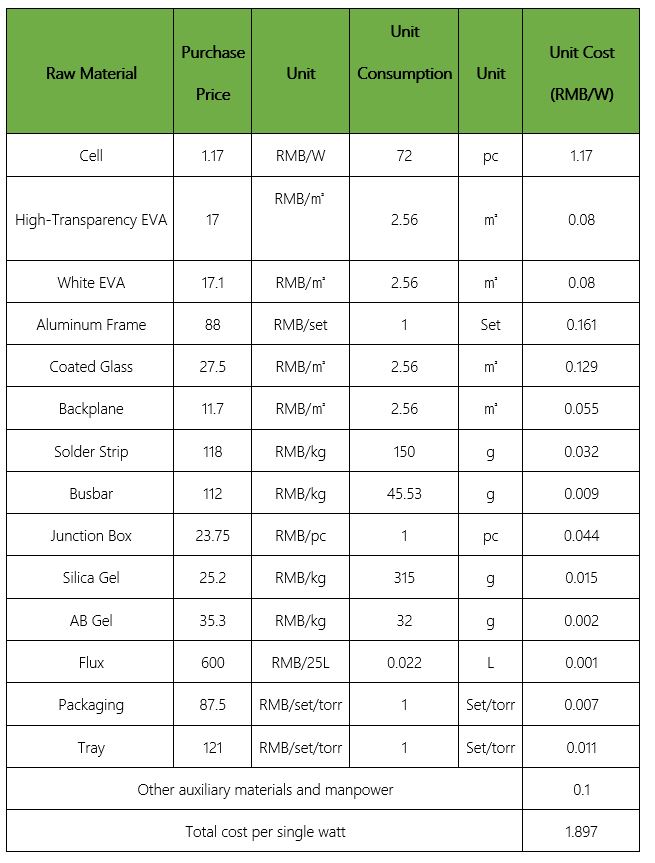 An observation on the production and operation of the industry chain in May indicates that both cell and module segments have upward adjusted their production schedules in the face of the traditional peak season for overseas markets and the robust development of distributed PV installations in the domestic market. Wafer provision remains restricted, and partial expanded capacity will release in the third quarter, and will arrive at a full load status at the end of the year in the earliest when coupled with the time required for capacity increment, which serves limited impact to the annual supply of polysilicon. Polysilicon is expected to maintain on a tight balance status between supply and demand, and is likely to rise further in prices. Under such development, module inflation has become an inevitable tendency.