According to the analysis of EnergyTrend under TrendForce, the comparatively excess production capacity of the wafer market that may derive under the accelerated release of wafer supply during 2021 is likely to actuate a reduction of wafer prices and a decrement in product profit. As large-sized wafers (M10/G12) become the market trend, the integrated arrangement for businesses in wafers, cells, and modules has become evident.

A retrospect on the price trends of wafers in 2020 indicates that the pandemic during the first half of the year had resulted a 20% declination in the prices of wafers from the accumulated sluggish domestic demand, and the recovered end market demand in the third quarter, together with the tight supply and inflation of upstream polysilicon, had propelled the prices of mono-Si wafers to return to the level in the beginning of the year. However, the production lines of wafers failed to conform to the anticipation on upgrades and production due to multiple factors including material provision and power restrictions, which led to the robust prices of the mono-Si M6 wafers that is the mainstream market product. The scarcity of G1 wafer resources caused by the flourishing demand for wafers from the rush of installations had generated a minor inflation for the product. In terms of multi-Si wafers, the prolonged stagnancy in downstream demand, as well as the unrecovered end demand from overseas, have prompted for a continuously low production for multi-Si wafer businesses, with minor fall back in prices during December.

With the significant results in the cost reduction for large-sized wafers, there may be a differentiation in the prices of mono-Si wafers with various sizes during 2021. The survey on the industry chain indicates that the module products produced with the three wafers of M6, M10, and G12 are able to further decrease the cost of the end system and kWh compared to 158 wafers, of which M10 and G12 modules are capable of reducing the system cost at over 8%, signaling a significant performance in cost reduction. With the gradually releasing new production capacity of mono-Si wafers, the demand for large-sized wafers becomes vigorous for the end sector, and a certain degree of reduction is maintained for the prices of mono-Si wafers during 2021, thus the overall profit of the wafer sector will be suppressed, whereas the differentiation in wafer prices may become even more apparent. 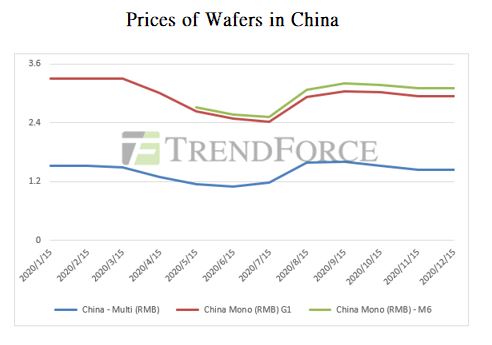 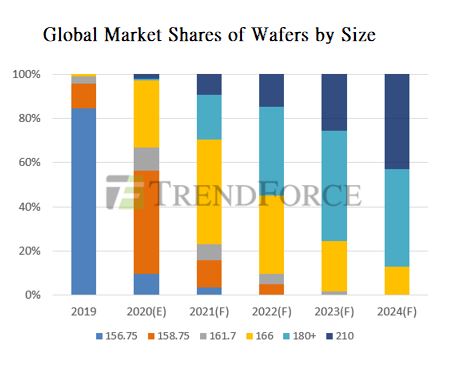 Supply Tightens for Large-Sized Wafers, and New Production Capacity Is Being Established in Regions with Low Electricity Prices

Wafer suppliers were affected by the undersupply of the raw material, the electricity rationing policy, and other issues during 2H21. As a result, they have progressed slower than expected in adding new production capacity or upgrading production lines for raising the output of large-sized (M10/G12) wafers. In order to maintain wafer supply, PV product manufacturers in the downstream have opted to secure wafer shipments through long-term agreements. The production capacity of LONGi, Zhonghuan, Shangji, and JYT for large-sized wafers has been fully booked. At the same time, the leading Chinese wafer suppliers are starting a new round of capacity expansion and aim to rapidly increase output of large-sized wafers. Due to cost considerations, they are establishing new production capacity in provinces or regions such as Yunnan and Sichuan where electricity prices are relatively low. Furthermore, the trend of the integration of the upstream sections including polysilicon, ingots, and wafers is becoming more evident. 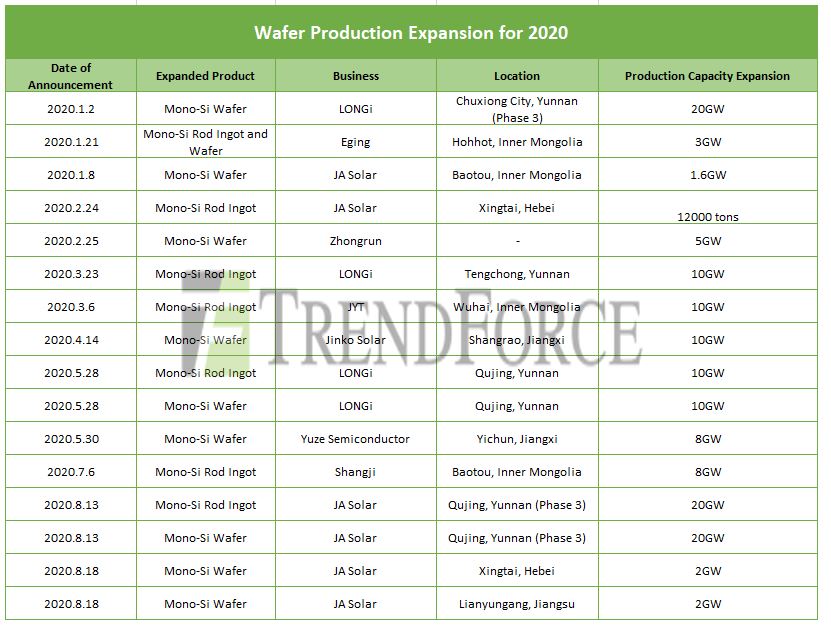 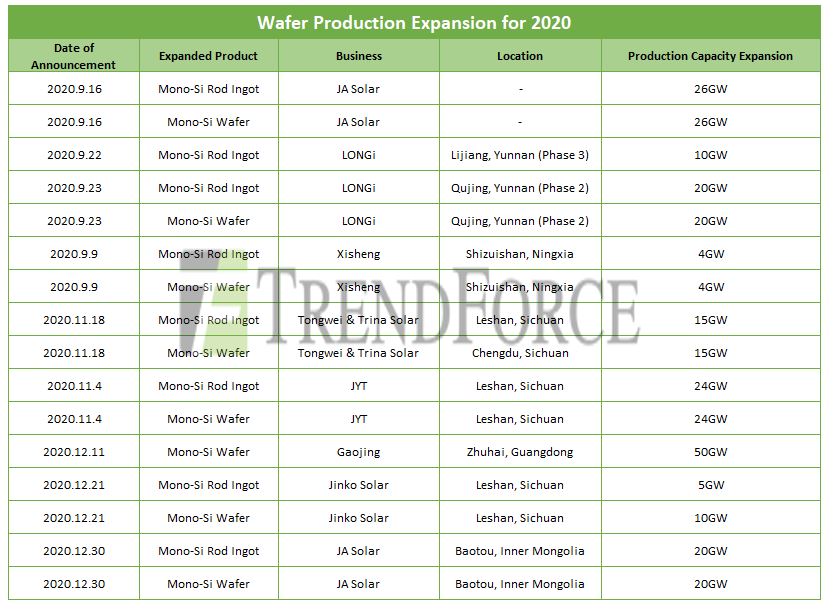 Technological Advances Continue for Doping and Thinner Wafers, and Wafer Thickness Has Been Reduced to 175μm

To complement the technological innovations and advances in cell and modules, wafer suppliers shifted their technological focus to doping and reduction in wafer thickness in 2020.

Regarding trends related to attributes of wafers, thickness reduction continued during 2020. In the P-type segment, there has been a shift to large-sized products. With the increase in size, the breakage rate of P-type wafers during cell processing has also risen as well. Looking at advances with respect to products in mass production, the thickness that is mainstream in the market is shifting from 180μm to 175μm. In the N-type segment, the demand is gradually growing for wafers that are 100-130μm in thickness as the costs of cells and modules are being optimized in the downstream. There will be considerable market potential for N-type wafers in the medium to long term. It is also worth pointing out that the overseas patents for gallium-doped wafers expired in 2020, so the substitution of boron doping with gallium doping is accelerating. The adoption of gallium-doped wafers will further resolve the issue of light-induced degradation that is experienced by mono-Si PERC cells and thereby significantly lower the cost of modules.

On the whole, TrendForce believes that the wafer market will exhibit the following trends during 2021:

An acceleration in the shift to large-sized wafers: The whole supply chain will gradually adopt M10/G12 wafers during the 2020-2021 period. In China, domestic wafer suppliers will be adding new production capacity in regions with lower electricity prices (e.g., Yunnan and Sichuan). Products in various sizes will co-exist in the wafer market over the next three years. With respect to M10/G12 wafers, a substantial amount of new production capacity for these products will become available during 2021. By 2022, the collective market share of M10 and G12 wafers is projected to reach 55%.

A decline in prices: Mono-Si wafers in various sizes will all experience a price decline in 2021 as new production lines for these products enter operation. The demand for large-sized wafers is expected to be strong, and the divergence in price trends will become more pronounced.

Continuing technological advances: The shift toward larger wafers means that there is more room for improvement in the manufacturing of thinner wafers with respect to production yield rate and breakage rate. For now, the thickness of the mainstream wafers has been reduced to 175μm. In the N-type segment, demand is gradually picking up in the downstream sections of the supply chain. The market potential of N-type wafers will continue to be explored over the medium to long term.