EnergyTrend: Above-Expected Growth for HJT and TOPCon Will Serve as an Inflection Point for the Market for N-Type Cells
2021-01-05   |  Editor：sun meg  |  141 Numbers

The performance of the N-type cells has been constantly assessed and verified over the recent two years (2018-2020). Following these efforts, TOPCon and HJT have become the mainstream technologies that contribute to the market expansion of N-type cells. Currently, cell suppliers have begun to scale up production for TOPCon and HJT products. The total production capacity for N-type cells is projected to increase marginally from 14.2GW in 2019 to 1.73GW in 2020, according to the latest analysis by EnergyTrend, the new energy research unit of TrendForce. On the whole, the development of the N-type cells has advanced to the pilot-scale production stage. 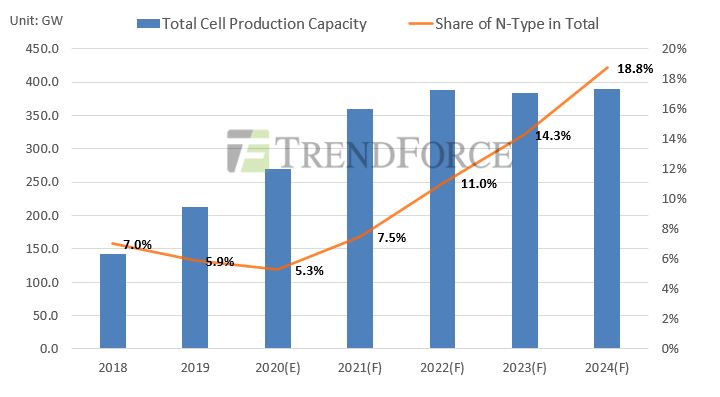 In the aspect of technology trends, the conversion efficiency rate of N-type cells can still be raised further through TOPCon, HJT, IBC, and other improvements related to the fabrication process and design. The total combined production capacity of TOPCon and HJT cells is projected to reach 10GW and account for 70.4% of the total production capacity for N-Type cells by the end of 2020. 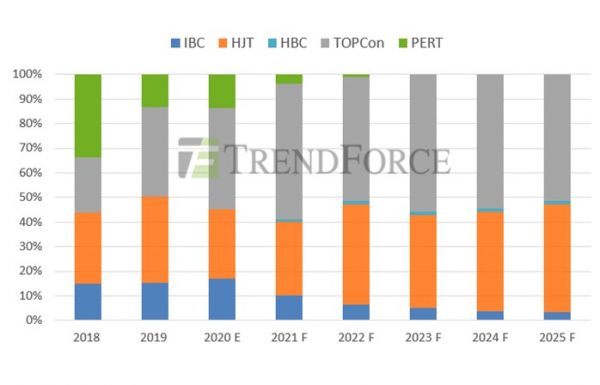 TrendForce’s latest survey of companies that are developing N-type products indicates that most new entrants in the HJT market have just reached pilot-scale production. They have yet to begin scaling up to the GW level. As for companies that are in the TOPCon market, they are mostly vertically integrated manufacturers of PV products and have reserved a part of their future capacity expansion plans for upgrading to this technology. In the short term, TOPCon will surpass HJT in terms of production capacity.

TOPCon: Costs of Production Lines Could Drop Below RMB 300 Million per GW 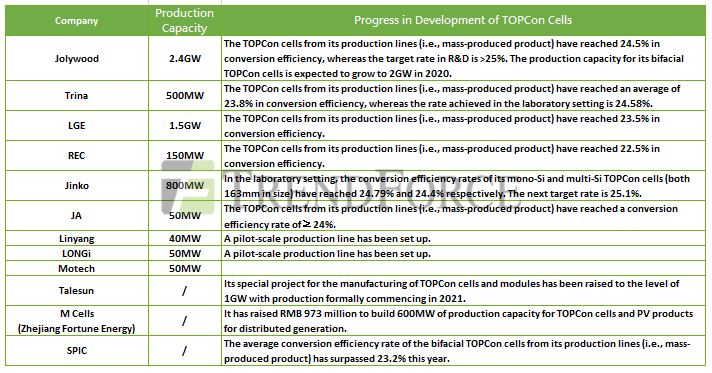 In the aspect of equipment, a production line for TOPCon cells is an existing cell production line with the addition of three types of process equipment: a system for layer deposition, a system for boron diffusion, and a system for wet (chemical) etching. China’s solar industry has achieved a high level of self-sufficiency in the supply of these three types of equipment. LPCVD is currently the mainstream method for the deposition of the tunnel oxide and poly-Si layers. Chinese (domestic) equipment suppliers have achieved a high level of maturity in the development of LPCVD systems. Examples of domestic equipment suppliers that offer LPCVD systems include SC New Energy, NAURA, and Laplace Systems. Another method for layer deposition is PEALD. Among domestic suppliers, WXCC has attained mass production for PEALD systems. As for boron diffusion, the domestic equipment suppliers that offer solutions for this specific process include NAURA and SC New Energy.

As of now, the investment cost of setting up a production line for TOPCon cells can come to around RMB$ 300-350 million per GW. However, it could fall belowRMB$ 300 million per GW in the near future as equipment experiences a reduction in price and an increase in throughput thanks to technological advances. 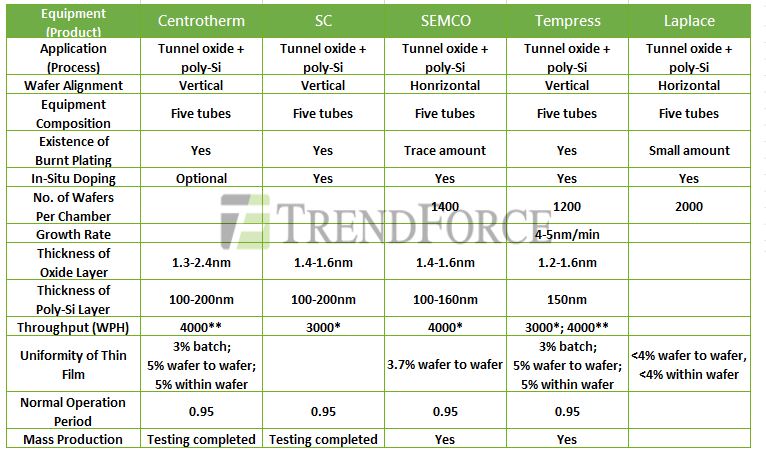 Challenges to Widespread Adoption of TOPCon

Technical bottlenecks and cost are the two main obstacles to the widespread adoption of TOPCon. When applied to mainstream and mass-produced cells, TOPCon offers an improvement of 1 percentage point over PERC in absolute conversion efficiency rate. However, TOPCon is the more expensive technology compared with PERC, and it has yet to present a clear-cut advantage in cost-performance ratio. At present, there are many technological paths in the development of N-type cells, so cell suppliers are still waiting to see which technologies will be worth adopting.

TOPCon is clearly at a cost disadvantage compared with PERC due to the increase in silver (conductive) paste consumption. Silver paste is applied to both sides of a TOPCon cell, and the amount required for the technology comes to around 130-150mg per piece. In contrast, the amount required for a PERC cell is around 85mg per piece. Furthermore, the yield rate of TOPCon production lines has only risen to a high of 88%. At this level, the cost of TOPCon cells is still RMB$ 0.2 higher than the cost of conventional cells. To be truly competitive against conventional cells, TOPCon cells have to narrow the cost difference to RMB$ 0.07. The target yield rate therefore has to be at least 95% in order for this to happen.

HJT: Many More GW-Scale Production Lines Have Entered Development in 2020

In HJT market, the three separate technological paths respectively forged by REC (with Meyer Burger), Tongwei, and GS Solar have been the focus of attention. The three companies have developed their own solutions for commercial production lines, so there are differences among them in terms of the cell manufacturing equipment as well as the complementing silver paste and target materials. Which solution is stable enough for widespread adoption will eventually be known once the three companies have deployed their process technologies and begin mass production. The first significant wave of the deployment of the HJT production lines will occur in the middle of 2021, and the projects related to the GW scale-up of production are expected to follow. These activities will initiate industrial production.

In the aspect of equipment, the HJT production lines in China have all adopted imported equipment. The investment cost of setting up a production line for HJT cells is now betweenRMB$800 million and RMB$1 billion. If all equipment systems are domestically sourced, then the cost could drop to RMB$ 500-600 million. Some Chinese cell suppliers have deployed domestic equipment in their pilot-scale production lines for HJT cells. The cost is expected to fall in the future due to the gradual maturation of both domestic equipment technologies and techniques for mass production. Also, a decline in cost will lead to a corresponding increase in IRR and thereby encourage more investments in HJT from the downstream of the supply chain. 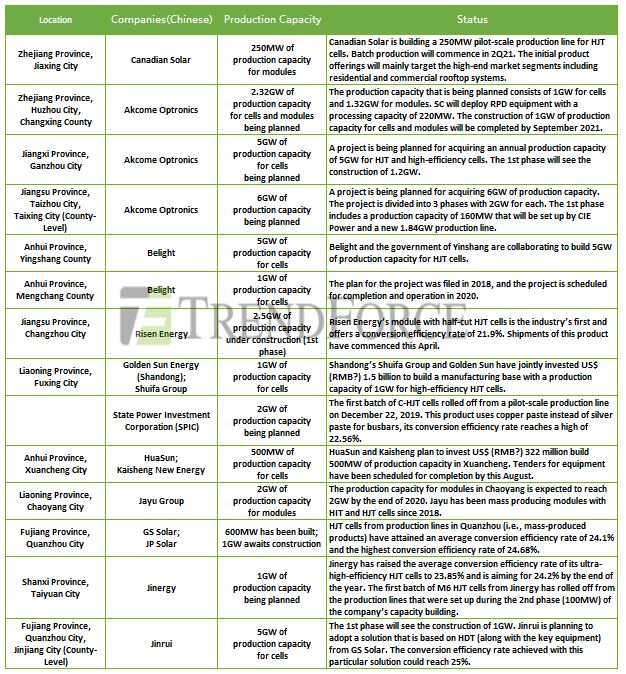 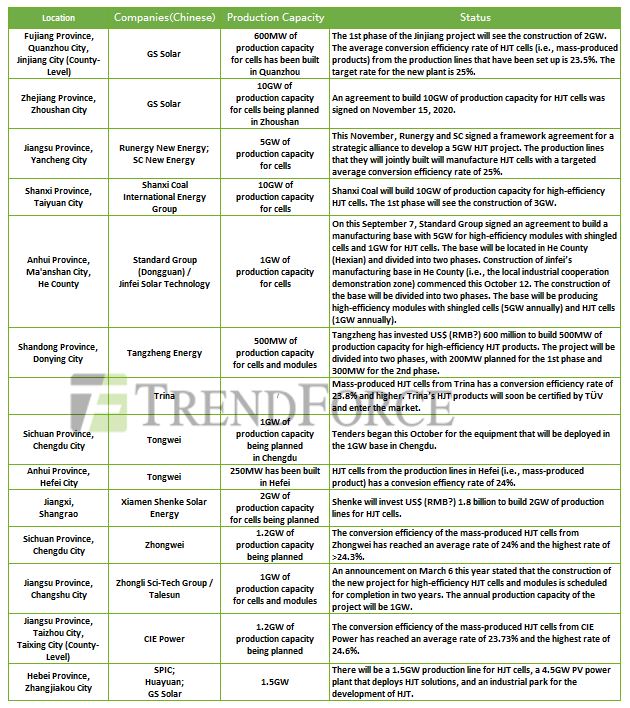 A transcending progress has been made in the localized equipment for the four procedures of HJT, and SC New Energy Technology has developed texturing and cleaning equipment for HJT. There is a relatively lower degree of localization in the equipment for a-Si deposition, though local manufacturers, including Ideal Energy, Maxwell, Xun Li Photovoltaic, Archers System, and GS Solar, have achieved successful development through autonomous R&D, and are steadily implementing the localization of thin film deposition.

Both GS Solar and SC New Energy Technology have corresponding product development for the preparation phase of TCO. For the metallization process, the difference between heterojunction silkscreen printing equipment and PERC is that the former adopts a low-temperature process that requires drying and solidifying, and the speed of printing is relatively slow, which reduces the performance of the equipment, whereas the extended drying time would require an oven that has a different design to traditional cells. Baccini and Micro-tec are the major overseas manufacturers for heterojunction silkscreen printing equipment, whereas domestic manufacturers such as Maxwell, SC New Energy Technology, and Folungwin are also arranging for the particular equipment.

Judging by the manufacturers of HJT cells, the technology roadmap of HJT has increasing recognition from businesses, which resulted in the multiple entries into the production of HJT cells that comprise of traditional cell businesses, module makers, and emerging HJT businesses. Shanxi Coal, Akcome, Risen Energy, and GS Solar have announced the GW-level expansion projects, which are expected to commence in 2021.

2021 Serves as a Critical Window for the Development of HJT

Comprehensively speaking, N cell contains a higher conversion efficiency limit, and has a larger elevation space compared to PERC, which is expected to become the next generation mainstream cell technology. However, the cost factor has resulted in the relatively low price-performance ratio for the current N technology. The modules of N cells are currently applied on high-end niche markets, including large domestic ground power stations, as well as overseas household and business discrete rooftops, and a further increase in penetration rate will require continuous breakthroughs in the cost reduction of the N technology.

The road map in the cost reduction for TOPCon and HJT has gradually clarified, and a further observation will be required to determine the timing for an extensive release of future demand. The progress of industrialization is impacted by numerous factors, including the improvement in efficiency, the progress in cost reduction, and the initial investment in production lines, where the key lies on the follow-up on the cost reduction for primary segments. In terms of the status of the industry chain, the important window of the HJT industry will fall on 2Q21-3Q21, and a large-scale production can be expected for the HIT cell technology, should various parameters, such as the yield rate and the conversion efficiency, receive verification on the GW scale then.

This is an original report composed by EnergyTrend of TrendForce. Please state the source for any citation or reprints. 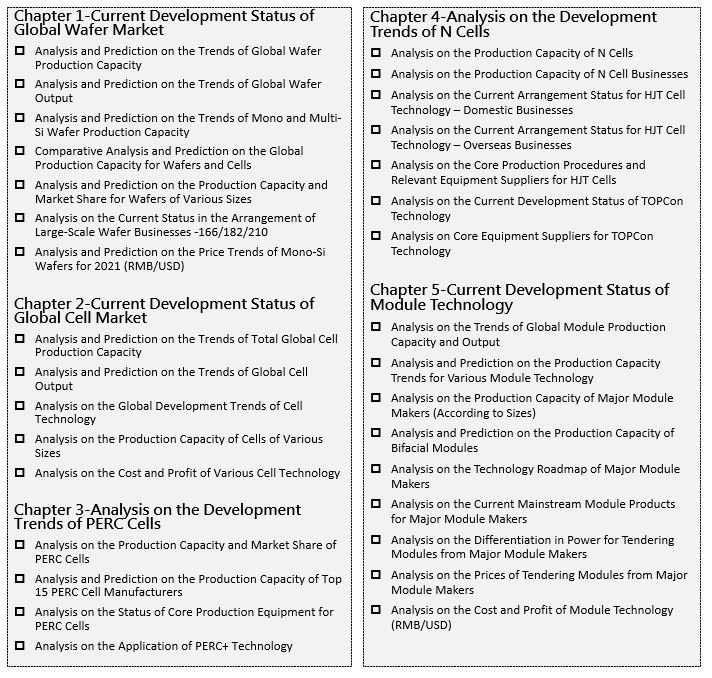 The content and data of this report were obtained from the advanced technical report on the photovoltaic industry by EnergyTrend. Please contact the following personnel if you wish to understand more about the details of EnergyTrend reports: