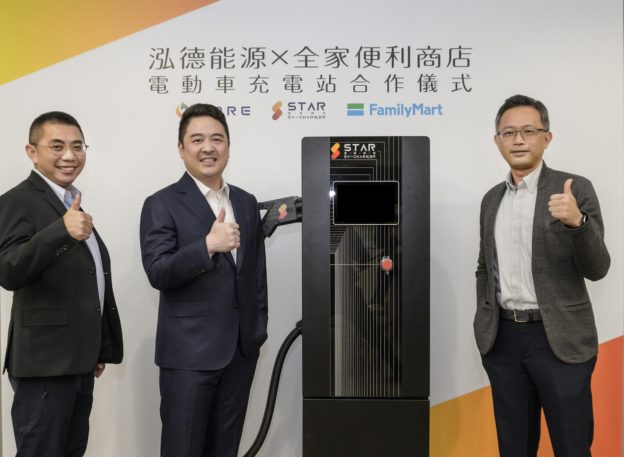 As the demand for charging stations has risen with the soaring number of electric vehicles, FamilyMart will become the first convenience store franchise providing EV charging services in Taiwan, where a trial run will be launched as soon as late 2022.

HD Renewable Energy announced on June 15 that its subsidiary Star EV Charger will sign a partnership agreement with FamilyMart to set up DC charging stations outside its convenience stores, aiming to provide comprehensive support for customers when travelling.

As the agreement states, Star EV Charger will establish 120 kW fast chargers outside 10 FamilyMart stores at the first stage, with trial run of the first station scheduled to be launched by the end of this year.

This is good news for EV drivers. When they need to travel more than 300 km for a single trip, the problem of charger locations must be considered. In addition to stations in freeway rest areas, charging stations built by automakers per se and those along major roads, convenience stores are the most ideal place for charging station construction because of their wide coverage.

Unlike those in urban areas, convenience stores in suburbs mostly come with a sizeable parking lot, allowing visitors to shop inside the store. If they take a rest and stay in a store for, say, 30 minutes to have a meal, fast chargers in the parking lot can charge their cars rapidly. For example, a 120 kW charger can deliver 100km+ of range for every EV model.

The charging stations outside FamilyMart stores will be equipped with CCS1 and CCS2 plugs, which are compatible with almost every EV model in Taiwan. The next question that FamilyMart will need to consider is how many chargers to install in each store.

As fast-charging stations require support from grid connection, software control and relevant equipment, it may cost—even if land-related spending is ignored—at least NT$1 million to establish a single station. If a store has only two chargers, problems of long lines and dispute over parking spot will be inevitable. However, the cost of building more than two chargers might be excessively high.

Creating an EV charging station network can be time-consuming—particularly when the government has no intention to take the lead. Under such circumstances, charging station and EV companies have no choice but to slowly expand charging facilities and whenever necessary adjust their strategies. When providing relevant services, the said companies may boldly set a charging rate to find the market equilibrium first so that they can establish a sound charging network.

It is worth noting that HD Renewable Energy not only focuses on the charging station market but runs business in the green energy and electricity retailing and storage sectors. The company’s suburb-based strategy will soon enable it to provide green energy for EV chargers, thereby doubling the efficiency of emissions reduction.