The lithium battery, a key component of electric vehicles, ushered in a miraculous reversal. The proportion of lithium iron phosphate batteries reached 52% last year, surpassing that of ternary batteries. In the first quarter of this year, it continued to grow. Analysts estimate that its market share will exceed 60% in 2024.

Market analysis agency TrendForce pointed out, from the perspective of China, the world's largest electric vehicle market, the power battery market reversed in 2021. Lithium iron phosphate batteries officially surpassed ternary batteries with 52% of installed capacity. Installed capacity in the first quarter of this year continued to rise to a 58% share and growth rate was much faster than that of ternary batteries.

However, from the perspective of the global electric vehicle market, thanks to the increase in the penetration rate of new energy vehicles in Europe and the United States, ternary batteries will still had a market share of more than 60% in 2021, far exceeding lithium iron phosphate batteries, which had a market share of about 32~ 36%. 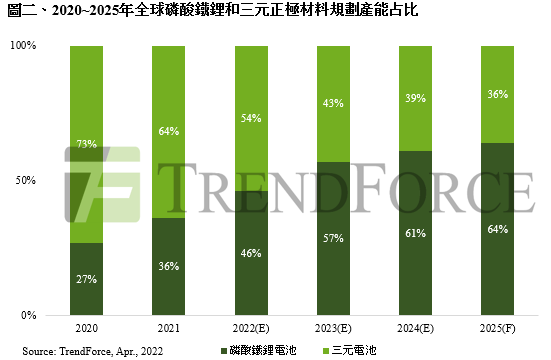 However, it is almost no surprise that lithium iron phosphate batteries will become the lead actor of the market in the next two or three years because major car manufacturers are accelerating the transformation of electric vehicles, which will make the supply of lithium batteries even tighter. Including wafers and automotive wires, there are supply problems. The first focus of car manufacturers has shifted from performance to cost.

From the perspective of consumers switching from ternary lithium batteries to lithium iron phosphate batteries, although acceleration of electric vehicles will become weaker, acceleration is still far better compared to fuel vehicles with similar vehicle prices. Now, the general public may not need the explosive performance of zero-hundred acceleration within 4 seconds and acceleration that is 3 seconds slower can keep the car price within an acceptable range, which is definitely a worthwhile compromise.