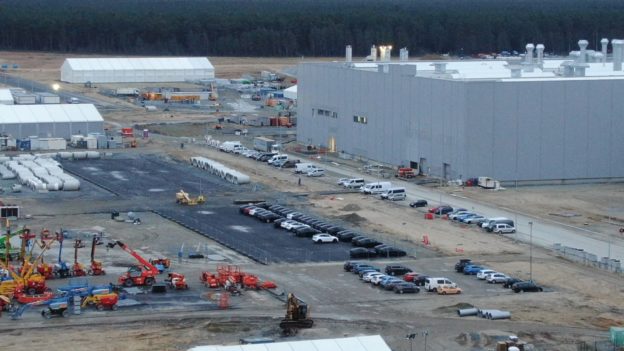 Tesla has been hard at work making progress on Giga Berlin in hopes of kicking off production as soon as possible. Although a formal opening has yet to take place, some have discovered the existence of 33 German-made Model Y vehicles parked inside the facility.

Tesla’s Gigafactory Berlin-Brandenburg (Giga Berlin) was originally slated to kick off production in 2H21, but factors related to politics, environmental production, labor, and law resulted in disappointing progress. In a surprising turn of events, however, Giga Berlin has already manufactured 33 Model Y vehicles to usher in the new year.

There are always enthusiasts concerning themselves with Tesla factories by leveraging drones and cameras, even in Germany. Just this past week, German netizen Tobias Lindh discovered that about 12 Model Y vehicles had been manufactured in Giga Berlin and subsequently shipped away via trucks. He also discovered that an additional 33 Model Y vehicles were parked in the factory on January 6.

Tesla has not obtained legal approval for Giga Berlin. Hence, this batch of Model Y vehicles may be intended only for testing the factory’s production lines as opposed to being delivered to clients. Formal approval to operate is contingent on the Brandenburg State Office of Environment, Health and Consumer Protection, which has yet to provide a schedule set in stone, although Tesla has received vocal support from local allies.

The IG Metall union has established a new office next to Giga Berlin because it expects the factory to require as many as 12,000 workers, representing a tremendous opportunity for the union, according to which Giga Berlin has been making good progress.

Tesla manufactured about 930,000 EVs last year, more than 300,000 of which were produced in 4Q21. Should the Berlin factory expand its production capacity even further, Tesla will likely surpass the 1.5 million vehicle mark this year. The most important mission of Giga Berlin, bar none, is Model Y production.

Thanks to the excessively high demand for Model Y vehicles, ones bound for the European market are now manufactured in Gigafactory Shanghai, meaning the deliveries have been extremely limited. Once Gigafactory Berlin-Brandenburg starts manufacturing German-made Model Y vehicles, this electric SUV, said to be the most popular in the world, can possibly challenge the goal of one million vehicles sold per year.