Ford brass are finding themselves in hot waters since they as recently as last year mocked Tesla for its faulty roof incidents, while Ford is now dealing with an even more severe issue of its own.

Ford issued a comprehensive recall in Canada with respect to its electric SUV Mustang Mach-E, whose glass roof and windshield are suspected to become detached. The automaker is urging car owners to bring their vehicles to Ford service centers for inspection.

This recall hearkens back to Ford BEV GM Darren Palmer’s declaration last year, shortly after deliveries started for the electric Mustang SUVs, that EV owners would no longer need to settle for compromises in vehicle assembly quality with the Mach-E.

“The doors fit properly, the plastics and other materials color-match, the bumpers don’t fall off, the roof doesn’t come off when you wash it,” said Darren Palmer in an interview with Autoblog. While Palmer did not name any names, the statement can certainly be construed as one that took vicious aim at the faulty Tesla Model Y vehicles that made waves at the time.

Taiwanese car owners in particular are undoubtedly familiar with Ford’s quality of assembly. This time, however, it would be Canadian car owners that experience the joy of endless visits to auto repair shops. Of the two recall notices issued in Canada by Ford, one specifically targets the glass sunroof.

According to the notice, “On certain vehicles, the glass panel of the panoramic sunroof may not be properly attached. Over time, the glass could become loose and separate from the vehicle.” Ford indicates that 1,812 Mustang Mach-E vehicles manufactured in 2021 need to be returned to Ford’s service centers for inspection, while another 3,178 vehicles have suffered even more serious issues courtesy of incorrectly installed windshield. 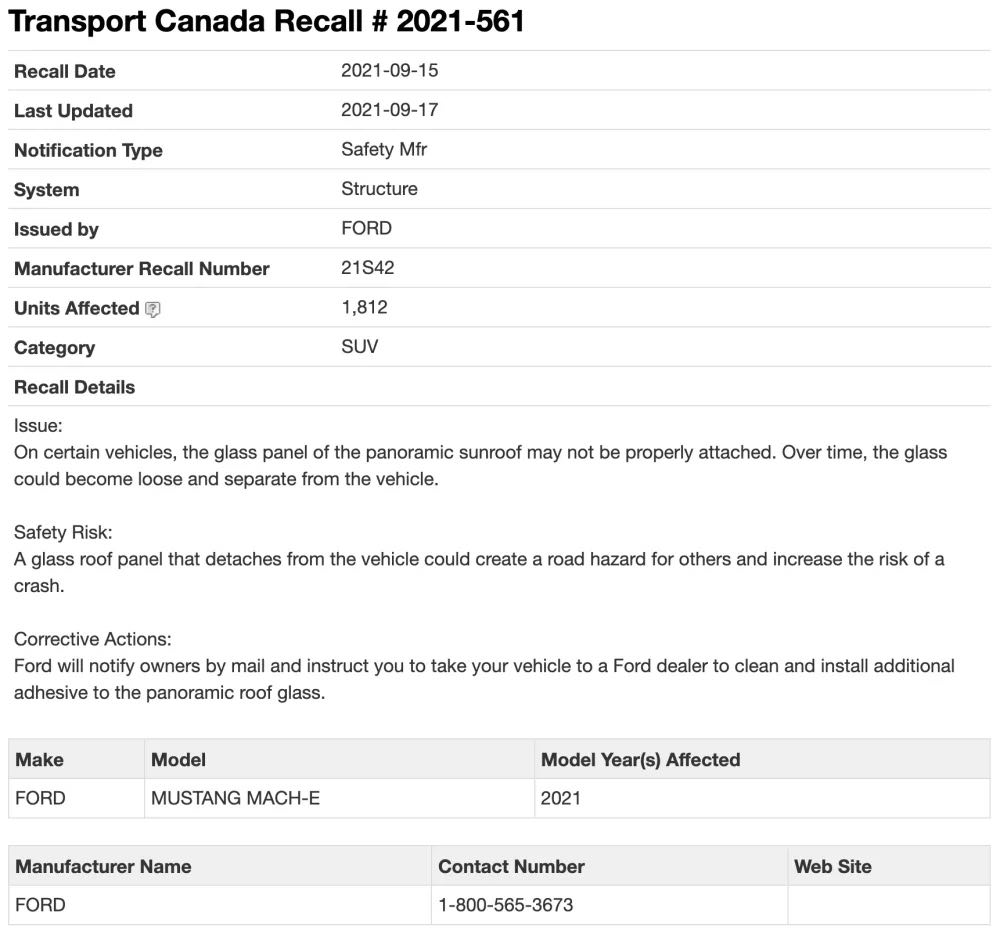 Ford is essentially telling car owners in Canada to check their Mach-Es for the two aforementioned issues as soon as possible and bring their vehicles to Ford service centers, where reinstallation and/or reinforcement services will be performed as needed.

Interestingly, all Mustang Mach-Es are assembled in Ford’s Mexican factory, but the automaker is issuing recalls for Canadian vehicles only. Car owners in the US are therefore starting to worry. After all, should their sunroof or windshield become detached on the road, such an incident could endanger the safety of the driver, other vehicles, and pedestrians.

At any rate, Ford’s determination to nip the problem in the bud as early as possible to avoid further harm remains commendable, although what is certain is the necessity of conducting thorough quality control prior to mocking a competitor’s products.