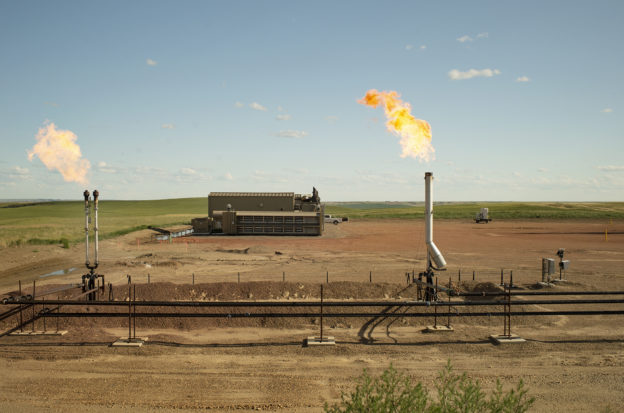 The commercial identity of Taiwan’s state-run oil company CPC is often recognized as a fire by the Taiwanese people. Where does this fire come from? Natural gas is always derived alongside the excavation of petroleum, though the output is never enough in economic value to establish gas pipelines, and cannot be accumulated in-situ, which has to be incinerated.

Natural gas cannot be transported to other areas for sales, whereas the establishment of pipeline infrastructures consumes excessive resources and time, and the lack of scale results in insignificant efficiency. How about collecting natural gas for generating and selling electricity? Gas turbine manufacturers, such as GE, had thought about promoting small gas-fired units used for power generation in oilfields, though a similar issue was also seen. The selling of electricity would require transporting transmission lines to the grid, and autonomous uses of the oilfields will not require such amount of electricity.

Finally, a different “mining industry” has come up with an idea of using the wasted natural gas, and established a marvellous concatenation with the petroleum industry. The former is referred to as the mining of bitcoins.

Miners transport the mining equipment to remote areas where oilfields are located, and supply electricity to the bitcoin mining data center using the natural gas power generation unwanted by the oilfields. The high temperature of 71°C derived from the mining data centers would provide warmth for miners at oilfields that have a higher latitude, such as the oilfields in North Dakota, during wintertime. Mining is possible as long as there is network, and this is how the natural gas from the oilfields that is burned for nothing is transformed to bitcoins.

This “fire” has been troubling the oil wells for quite some time now as natural gas cannot be converted into revenue, and has sustained the blaming from environmental protection groups regarding the extra emission of carbon. Now with this new method, bitcoin miners have become the nomads in this new era by carrying their belongings everywhere they go, and will move to the next oil well when they are done with the current one.

There are several commercial cooperation methods between the two parties. Miners can pay for the natural gas with partial bitcoins after mining, or miners can submit all bitcoins to the oil wells and charge rents and operation cost on the mining equipment.

This particular bitcoin mining method is still implemented on a small scale, with some as small as adhering to a single oil well, and there are less than 10 companies in North America that mine bitcoins extensively from the abandoned natural gas of large oilfields. However, many major petroleum companies are starting to become interested in this direction, where North Dakota, Equinor of Norway, and Equinor of Canada, have joined the array of electricity provision for bitcoin mining using the discarded natural gas.

Denver-based Crusoe is one of the largest companies in North America to mine bitcoins using the natural gas from oilfields. The company has 40 mobile containers of mining equipment, with 55 employees, and is planning to use the investment of US$128 million obtained in April on an additional of 100 mobile containers and twofold increase in staffs. Crusoe works with Kraken Oil and Gas Partners LLC, the largest crude oil producers in Montana who is capable of 10K barrels of crude oil per day.

US laws also utilize this commercial model. The US Senate passed the new regulation in April, and subverted the relaxed emission of methane implemented by the Trump administration. An incomplete incineration of the natural gas from oilfields that result in an emission to the air may become a violation. Apart from the US Senate, the Texas Senate and the New Mexico Senate are also drafting similar regulations. On the other hand, North Dakota and Wyoming have passed the bill, which states that crude oil producers will enjoy tax reduction when generating and supplying electricity, derived from the unused natural gas, for data centers, including bitcoin mining.

Mining using natural gas will also help with the overall carbon emission of bitcoin. Over 60% of the bitcoin mining computing comes from Asia, and the significant usage of coal-fried power generation that has generated high carbon emission has prompted a shift to gas-fired mining, which not only drastically reduces carbon emission, but also uses the natural gas that would have been wasted, thus resulting in zero carbon emission.

Oil wells and bitcoin mining seems like a match made in heaven, and mining centers located next to oil wells may become a standard configuration for the petroleum industry in the future.