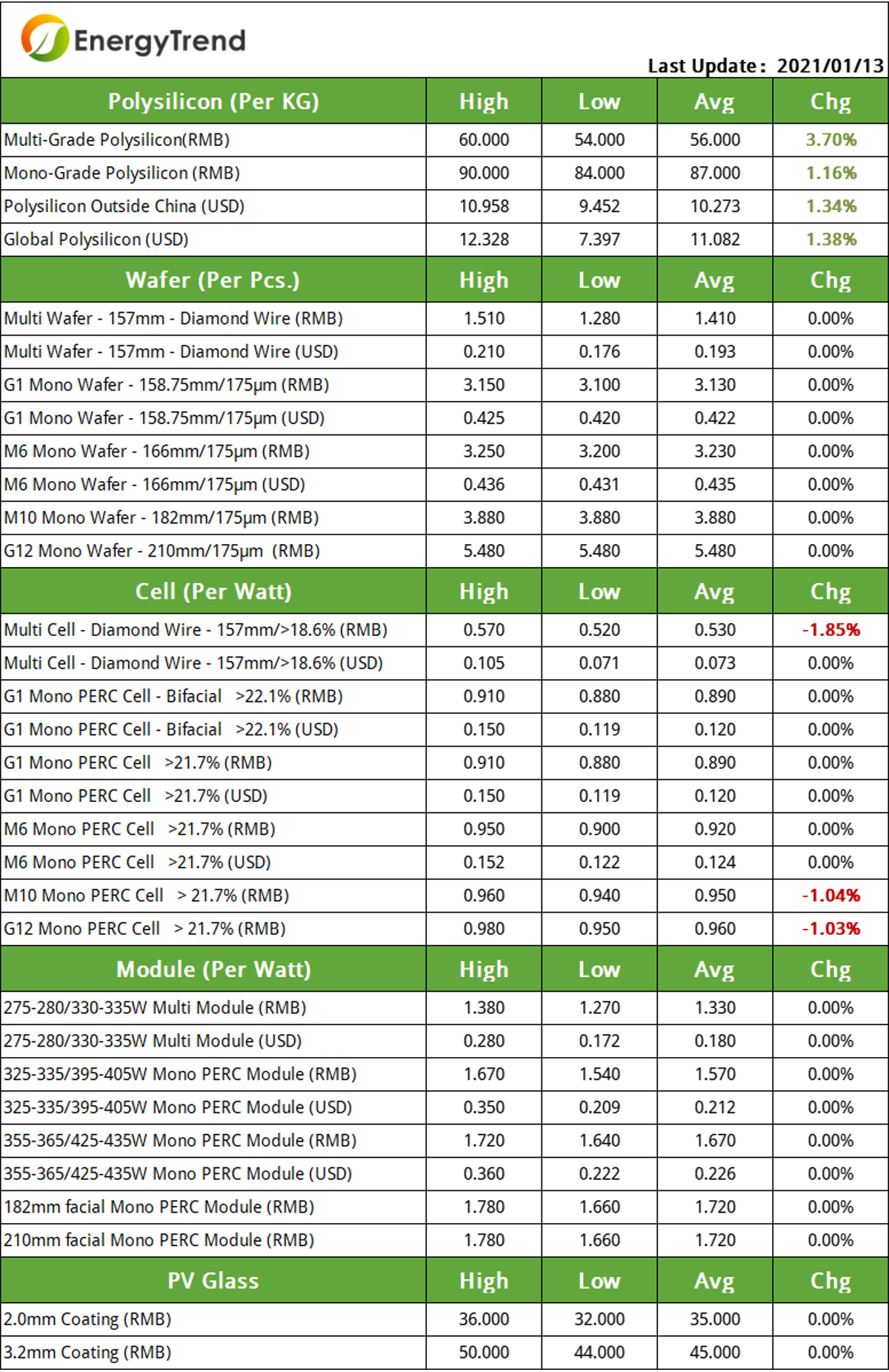 The purchase demand continues to flourish in the polysilicon market this week, where prices of polysilicon continue to rise. The continuance of rising prices in the polysilicon market is primarily invigorated by the demand for stocking and purchases from the downstream sector. Owing to factors including the pandemic, snowy weather, and logistics, a number of businesses may go into holiday in advance, which explains the accelerated production recently, especially with the evident demand in the orders of mono polysilicon. The apparent growth in partial orders of mono polysilicon has prompted a robust increase in the mainstream prices of the particular product to RMB 84-90/kg, with an average price of RMB 86/kg, whereas the mainstream quotation for multi polysilicon has arrived at RMB 54-60/kg after following up on the overall rise in market quotations, with an average price of RMB 56/kg, though there are still fewer orders that conclude at RMB 60/kg. The escalation in the overall quotations for mono and multi polysilicon has impelled a continuous elevation of global polysilicon prices, where the average price has been adjusted to US$11.082/W.

An observation on the production, operation, and shipment status of the polysilicon sector indicates that the 11 domestic operating multi polysilicon businesses have all resumed operation, and the domestic production volume of polysilicon is expected to arrive at 37K tons during January after a MoM increase in the production volume from businesses including Yongxiang, Ordos, and Dong Li subsequent to overhaul. Most polysilicon businesses have signed for January orders owing to factors including logistics and transportation prior to Chinese New Year, pandemic prevention and control, and the new production capacity of wafers in the midst of the stocking from the downstream wafer market, where the signing of orders until February for a number of businesses has resulted in a simultaneous increase in volume and prices for the polysilicon market in the existing phase, whereas the prices of partial sporadic orders have gone up significantly.

Wafer quotations are overall sturdy this week, with merely a small number of new concluded orders. As most first-tier businesses had scheduled the orders for this month during the start of the month, wafer businesses are focused on digesting existing orders this week, and the lesser new orders have generated overall stable quotations in the wafer market. The domestic and overseas quotations for mono-Si G1 wafers are currently sitting firmly at RMB 3.13/pc and US$0.422/pc respectively, whereas the domestic and overseas average prices for the M6 wafers are now at RMB 3.23/pc and US$0.435/pc respectively. The prices of large-sized wafers remain stabilized, among which the average prices for M10 and G12 wafers are now RMB 3.88/pc and RMB 5.48/pc respectively. With the progressive climbing in the production capacity for new projects in the wafer market since January, as well as the recently concluded long-term wafer orders in the market, the overall popularity of large-sized wafer products will continue to rise.

Regarding multi-Si wafers, the upstream quotations for multi polysilicon have once again attempted a rise this week, though the overall demand for the product remains inferior to that of mono polysilicon, which resulted in a more cautious attitude for multi-Si wafer businesses in upstream purchase orders. The overall order demand is insignificant this month, where most businesses are producing based on the build to order method, and market quotations are temporarily stable, which propelled the domestic and overseas average prices of multi-Si wafers to maintain at RMB 1.41/pc and US$0.193/pc respectively.

Cell quotations have slightly loosened this week, with the demand for downstream purchases decelerating at the same time. There have been less orders for high-efficiency mono-Si cells, and the downstream sector continues to apply pressure when requesting for quotations by adhering to a wait-and-see attitude, where partial second and third-tier businesses have expanded on the wiggle room for survival purposes. The mainstream quotations for M10 and G12 cells have accordingly reduced to RMB 0.94-0.96/W and RMB 0.95-0.98/W respectively, with respective average price of RMB 0.95/W and RMB 0.96/W. In terms of the market status for G1 and M6 cells, the overall order quotations for the former remain robust due to the continuous vitalization from overseas demand, with the domestic and overseas average prices now at RMB 0.89/W and US$0.12/W. The domestic and overseas average prices of M6 cells are temporarily lingering at RMB 0.92/W and US$0.124/W under the pressure coming from the vacuum period subsequent to the completion of the installation rush, despite with sufficient supply, and the wiggle room has expanded compared to the end of 2020.

The unclear market demand for multi-Si cells has led to a diminishment in the mainstream domestic quotation to RMB 0.52-0.57/W, with an average price of RMB 0.53/W, whereas the overseas quotations are essentially constant to that of last week, with the average price sitting at US$0.124/W.

Module prices are stabilized this week, and the demand for partial mono-Si products has weakened. G1 modules remain robust in prices owing to the perpetually galvanizing overseas demand, and the quotations for high-efficiency mono-Si modules from a number of second and third-tier makers have loosened due to a contraction in orders, where the latter are trying to obtain orders by offering larger degrees of bargains so as to maintain stable production. On the whole, the existing primary orders in the market are centralized in first-tier makers, which resulted in the overall constant quotations compared to last week, and the average prices of the 325-335W/395-405W and the 355-365/425-435W mono-Si modules are now sitting at RMB 1.57/W & US$0.212/W and RMB 1.67/W and US$0.226/W respectively. Large-sized modules are relatively sturdy in prices, where the average price for the 182 and 210 mono-Si PERC modules is now RMB 1.72/W. Looking at the tender market of modules, the group purchase from central enterprise modules on the GW-grade module that opened bidding recently will initiate shipment in the second and third quarter, and the demand ratio for 500W+ is approaching 70%, whereas the quotations for bifacial glass modules is evidently higher than that of single glass modules. Under the anticipation of various makers, the deferred shipment will lead to a certain degree of reduction in the overall prices of 500W+ high-efficiency modules compared to the spot market.

Glass prices continue to stabilize this week, of which the prices for 3.2mm and 2.0mm are now at RMB 44-50/㎡ and roughly 32-36/㎡ respectively. Having seen a decelerated end demand, the module cost for makers after glass purchases remains relatively high due to the robust quotations for photovoltaic glass, and a number of makers have adjusted the operating rate, though the actual impact has yet to spread to the photovoltaic glass sector.