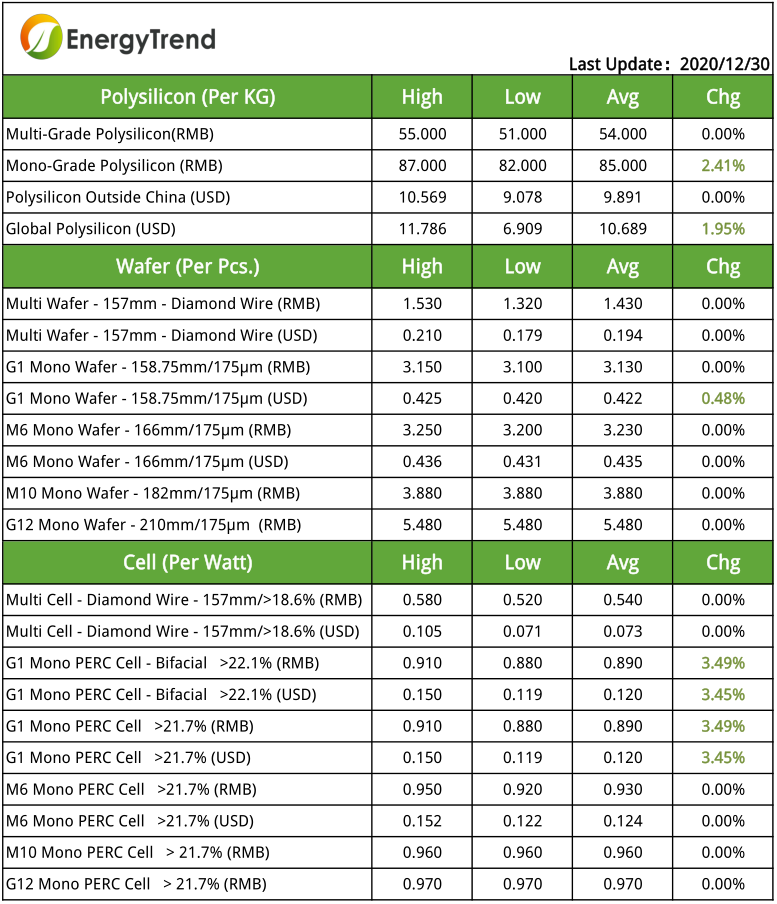 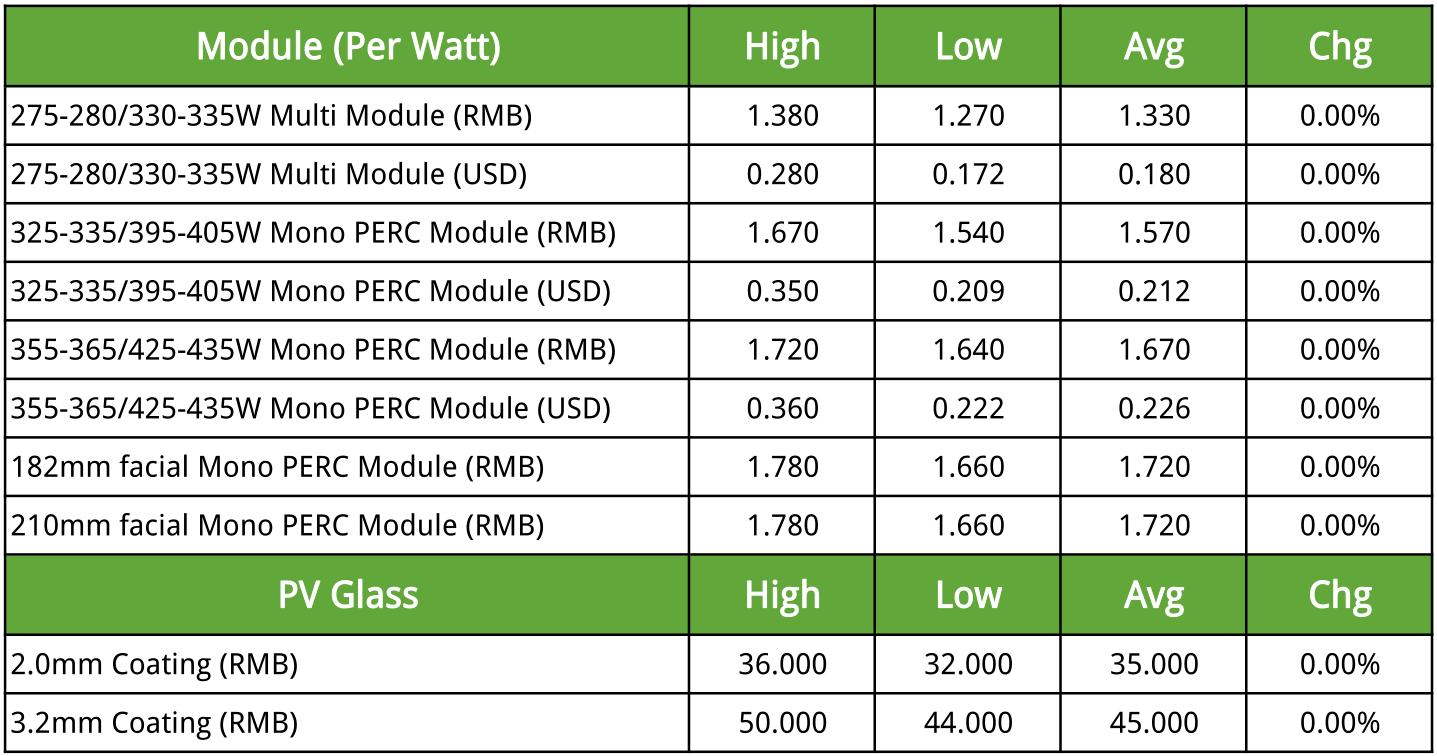 Quotations of polysilicon are continuing to recover this week, with a significant increase in the scale of purchase seen from the market. As the Chinese New Year holiday approaches, the downstream wafer market is starting to amplify on stocking, and the demand for mono polysilicon has drastically risen in particular, with an increase of roughly RMB 2/kg for the market price, which continues to elevate the mainstream price of mono polysilicon to RMB 82-87/kg, with an average price of RMB 85/kg. In terms of multi polysilicon, the relatively weaker future demand has resulted in insufficient stocking dynamics for businesses, and that the previously incomplete production resumption from a certain primary multi polysilicon businesses has also induced a comparatively stabilized provision of multi polysilicon, which actuated the mainstream quotations of multi polysilicon to RMB 51-55/kg this week, with the average price sitting sturdily at RMB 54/kg.

The overall prices of wafers continue to stabilize this week, with a relatively tight supply of mono-Si wafers. As leading businesses announced the unchanged pricing of wafers for January at the end of December, most businesses have successively followed up on the direction that resulted in temporarily stabilized prices, and the January orders of first-tier mono-Si wafer businesses are almost full, which attributes to the continuously strained supply. G1 wafers in particular have been reduced in supply volume due to the size transition from the midstream market, which induced a rise in the bargaining power of G1 and difficulties in obtaining low price resources, where partial new orders of G1 mono-Si wafers are preparing to increase in prices. The overseas quotation for G1 has slightly elevated to roughly US$0.422, whereas the domestic price remains robust at RMB 3.31/pc. Pertaining to large-scale wafers, the trailing progress in the production of new projects from the wafer market during the fourth quarter has prompted the relatively steady prices for various wafer products, among which the domestic and overseas average prices of M6 wafer are currently at RMB 3.23/pc and US$0.435/pc respectively, and the average prices for M10 and G12 wafers are RMB 3.88/pc and RMB 5.48/pc respectively.

Multi-Si wafer businesses are essentially producing based on the build to order method, and there have been no major changes in the quotations of multi-Si wafers owing to the stabilized upstream prices after the minor increase, as well as the gradually steady quotations for mono-Si wafers, thus prompting the domestic and overseas average prices to sit at RMB 1.43/pc and US$0.194/pc respectively.

Quotations for cells are overall sturdy this week, with minor escalation in the quotations for mono-Si G1 cells. The supply of resources is progressively diminishing in the market alongside the gradual contraction in the production capacity for mono-Si G1 cells, though the insignificant reduction of demand has generated the recent moderate increment in the concluded prices of G1 cells, where a number of orders were concluded at above RMB 0.9/W, which impelled the average price of G1 cells to RMB 0.89/W this week, with an overseas average price at US$0.12/W. For large-scale products, the demand for high-efficiency resources such as M6, M10, and G12 has exhibited subsiding trends, though the concluded prices of the market remain stable right now, and the sign of a minor depletion may appear in the first quarter of 2021 if demand is not continuously invigorated then. The domestic and overseas average prices of M6 cell sits at RMB 0.93/W and US$0.124 this week, whereas the average prices for M10 and G12 wafers are now at RMB 3.88/pc and RMB 5.48/pc.

There have been no apparent fluctuations in the supply and demand for multi-Si cells, and the quotations for cells are stabilized under robust upstream prices, which led to the overall sturdy mainstream quotation of multi-Si cells this week, where domestic cell price sits at RMB 0.52-0.58/W, with domestic and overseas average prices at RMB 0.54/W and US$ 0.073/W.

The overall quotations for the module market are stabilized this week as a reduction has yet to be seen from cell prices and auxiliary material cost from the upstream sector. In the face of an expected fall back in demand during the first quarter of 2021, most existing new orders in the market are centralized on first-tier businesses, and orders for second and third-tier businesses are somewhat stagnant. The prices of raw materials for modules are comparatively sturdy right now, which prompted for a stable market status on the whole, where the average prices of the 325-335W/395-405W and the 355-365/425-435W mono-Si module sit firmly at RMB 1.57/W and US$0.212/W as well as RMB 1.67/W and US$0.226/W respectively.

Large-scale modules are stable in prices, where the average price of the 182/210 mono-Si PERC module is now at RMB 1.72/W. The demand for 500W+ high efficiency modules has been frequently seen from downstream module tenders during the fourth quarter, and the industry has pointed at the development of large-scale modules, despite the differences in the specific sizes. As the new production capacity that is able to enter extensive mass production, large-scale modules are equipped with the foundation for promoting in the downstream market, and the particular product has become the primary direction for the industry chain of the photovoltaic industry in cost reduction for 2021.

Photovoltaic glass remains stable in prices this week, where 3.2mm is now at RMB 44-50/㎡, and 2.0mm is now priced at approximately RMB 32-36/㎡. Judging by the new orders for January, the popularity of photovoltaic glass has yet to subside, and the concluded prices are still relatively robust, where partial sporadic orders are concluded at additional RMB 1-2/㎡.