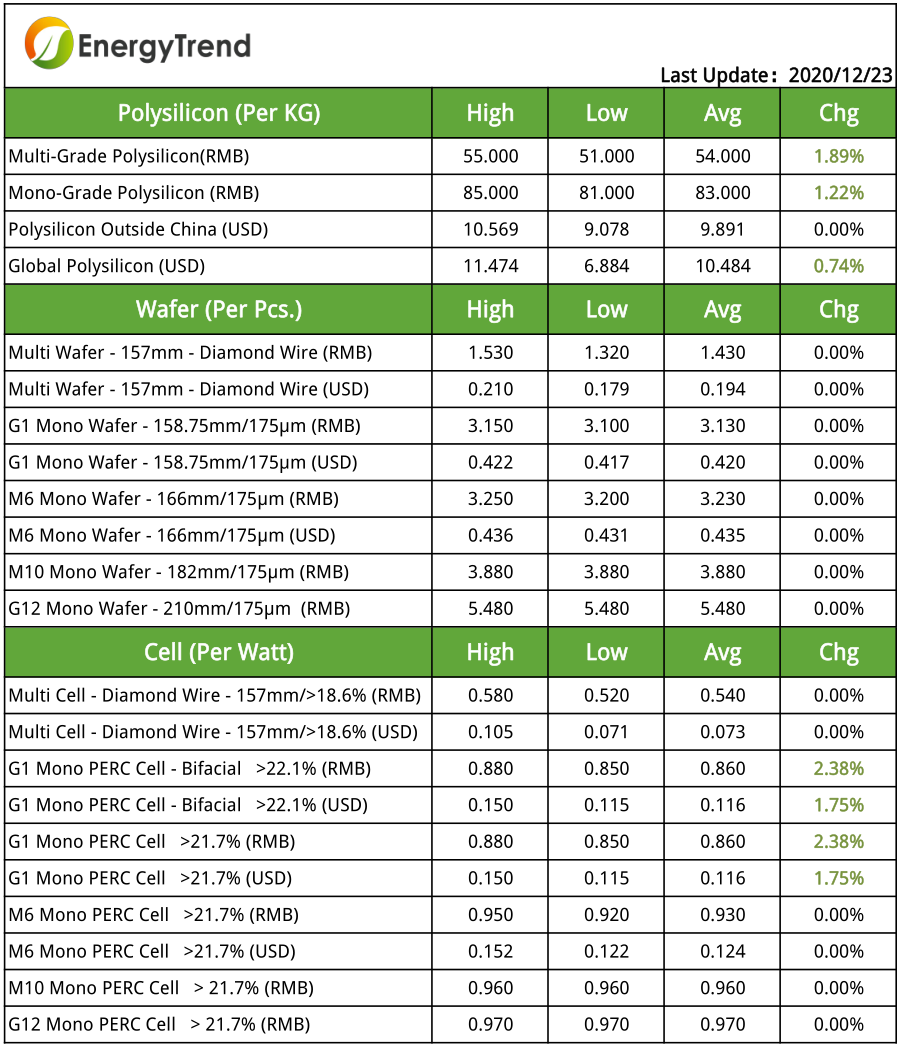 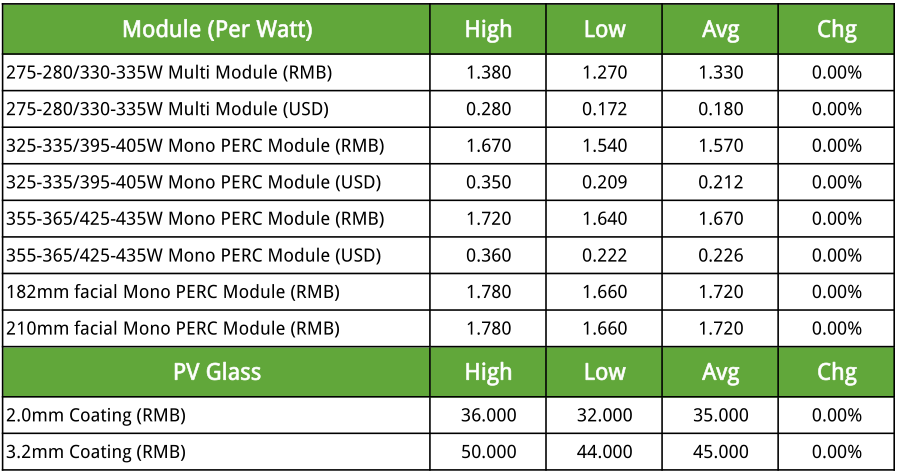 Downstream procurement and stocking has been aggressive this week, with polysilicon prices bottoming out. As the end of the year approaches, a number of businesses have begun negotiating for the orders of January, and the overall supply of polysilicon is gradually exhibiting a strained tendency. The successive conclusion of partial sporadic orders after inflation has given a good signal for the polysilicon market, which actuated the mainstream prices of mono polysilicon to rise to RMB 81-85/kg this week, with an average price of RMB 83/kg. In terms of the multi polysilicon market, the overall prices have suspended in reduction after the buffer period of declination, and has yet to exhibit a clear ascending trend in the subsequent market, though a price rise is ready to wriggle owing to the pull of mono polysilicon. The mainstream quotations for multi polysilicon is currently at RMB 51-55/kg, with the average price slightly increased to RMB 54/kg.

An observation on the production and operation plans of various polysilicon businesses indicates that there are currently 2 among 11 operating polysilicon businesses that are in the midst of overhaul due to a specific overhaul business that did not resume operation according to schedule, and the additional single business that entered a small-scale overhaul that has impacted the supply volume of polysilicon. The two businesses are expected to complete overhaul and resume operation in late December and early January. On the whole, as wafer businesses are expected to increase the demand for mono polysilicon during 2021, most polysilicon businesses have signed with the downstream sector on long-term orders for 2021. The successive release of expanded production capacity from wafer businesses has stimulated the demand for polysilicon in the short term as the hoarding and stocking period prior to the Chinese New Year arrives, and the conclusion of partial sporadic urgent orders on inflated prices has provided support for polysilicon prices in bottoming out.

Wafer prices are overall stable this week, with a number of wafer businesses reflecting on the relatively tight supply of the market. With the arrival of the end of the month, businesses in each sector of the supply chain started to stock up in raw materials prior to the Chinese New Year in 2021, where most businesses are currently in the negotiation phase for January prices, and the overall market is waiting on the successive order singing after the announcement of list prices from first-tier businesses, which resulted in wafer prices being constant to that of last week, among which the domestic and overseas overage prices of G1 and M6 wafers are maintained at RMB 3.13/pc & US$0.42/pc, and RMB 3.23/pc and US$0.435 respectively. The prices of large-scale products remain robust, of which the average prices for M10 and G12 wafers are sitting at RMB 3.88/pc and RMB 5.48/pc respectively. In addition, a number of mono-Si wafer businesses have reflected on the increasing numbers of recent orders and the overall excess demand market status, where partial urgent and sporadic orders have been successively concluded after an inflation of RMB 0.03-0.05/pc.

Upstream businesses are exhibiting intentions in upward adjusting the quotations for multi-Si wafers, though the supply and demand, as well as quotations, are relatively sturdy for the existing market, and businesses are still adhering to the build to order method, which propelled the current quotations for multi-Si wafers to remain constant to that of last week, with the domestic average price now at RMB 1.43/pc, and the overseas average price sitting at roughly US$0.194/pc.

The quotations for cells are predominantly stabilized this week, with marginal escalation in G1 cells. Module makers have been actively negotiating with cell businesses on orders and market demand this week, and partial end projects have been postponed to January 2021 for grid connection, apart from the stocking period prior to the Chinese New Year. The quotations for mono-Si cells are sturdy in the current stage, with cell businesses in the midst of delivering all shipment, and the majority of first-tier businesses are currently in the order delivering phase, where the overall quotations remain stable. However, the continuous tension in the supply of upstream wafers had directly impacted the production of second and third-tier businesses, and even resulted in partial orders not being delivered on time. In terms of mono-Si cells, the quotations for a number of G1 orders have risen due to the relatively fewer market supply, and the rise in G1 order quotations has impelled the average price of G1 cells to increase to RMB 0.86/W this week, and the overseas average price now sits at US$0.116/W. Bearing similarities to that of last week, the domestic and overseas average prices of M6 cells are maintained at RMB 0.93/W and US$0.124/W.

As for multi-Si cells, the end demand remains sluggish, and market visibility remains low, where a number of multi-Si wafers and cells have transitioned to the production of mono-Si products or exited the market, which resulted in overall stable mainstream quotations for multi-Si cells. The domestic cell price sits firmly at RMB 0.52-0.58/W, whereas the domestic and overseas average prices are now at RMB 0.54/W and US$0.073/W.

The termination in the installation rush for a number of projects at the end of the year has resulted in a recovering tendency for module orders, and prompted the prices of modules to remain stable this week, where the average prices of the 325-335W/395-405W mono-Si module remains sturdily at RMB 1.57/W and US$0.212/W, and the average prices of the 355-365/425-435W mono-Si module lingers at RMB 1.67/W and US$0.226/W. First-tier module makers have started negotiating for the overseas orders in January, and the overall operating rate has not been affected profoundly, whereas second and third-tier module makers are planning to reduce the operating rate in order to respond to the depleting demand during the first quarter of 2021. Regarding the tender market, a number of recent large-scale group purchases from central enterprises indicate that the supply of modules will be centralized within the first three quarters next year, and the bidding modules contain evidently higher power to those of 2020, whereas the substantially elevated demand for large-scale modules exhibits the apparent trend in leaning towards large-scale products. On the other hand, domestic module makers have reflected that the overseas market started negotiating for the spot prices of the first quarter of 2021 due to the time limit on grid connection for the purchasing end, and are hoping for a reduction in quotations, though uncertainties persist as a result of the tight supply of wafers and cells, as well as the stabilized prices in the glass market. Under this particular market status, the overall module prices are still relatively stabilized, however, partial second and third-tier businesses may adjust prices in the hope of obtaining additional orders.

The market of photovoltaic glass continues to stabilize this week, where the 3.2mm glass sits at RMB 44-50/㎡, and the 2.0mm glass is at roughly RMB 32-36/㎡. Most businesses are currently in the order delivering phase, and have yet to fully initiate the negotiation and quotations for the orders of next month, with new pricing expected to be announced by first-tier businesses at the end of the month. Partial businesses in the market have reflected that the investment in photovoltaic roll glass still contains a higher threshold, where the supply of glass in the short term may be lower than the market anticipation after taking into account factors of the cycles of production capacity commencement and yield rate, and that robust or slightly elevated quotations serve as the indicator in determining the market status of glass.