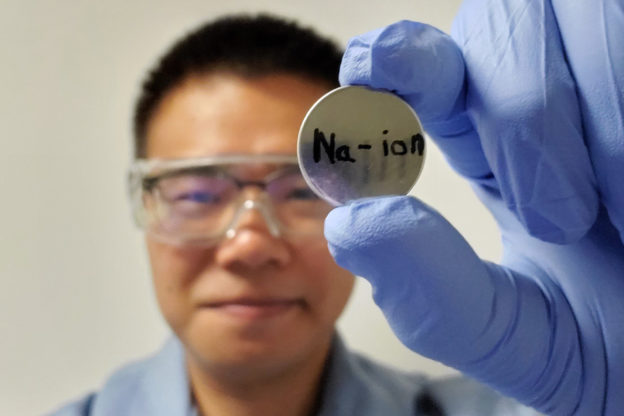 A research project jointly executed by scientists at Washington State University (WSU) and Pacific Northwest National Laboratory (PNNL) resulted in the creation of a sodium-ion battery that is relatively on par with some commercial lithium-ion batteries in terms of performance. Their report, which was published in ACS Energy Letters on April 28, further opens up the possibility of the commercialization of the sodium-ion battery technology that is based on a ubiquitous and low-cost material.

The latest sodium-ion battery can retain an 80% state of charge even after 1,000 cycles

The device created by the WSU-PNNL team offers the best performance so far in the record for sodium-ion batteries. Specifically, it has a capacity comparable to that of some commercial lithium-ion batteries and retains 80% of its charge after going through more than 1,000 cycles. The research on the design of the device was headed by Lin Yuehe, a professor at WSU’s School of Mechanical and Material Engineering, and Li Xiaolin, a senior researcher at PNNL. The research was also supported by the Office of Electricity under the US Department of Energy.

Nevertheless, lithium-ion batteries are currently the dominant battery technology and widely adopted in consumer electronics (e.g., smartphones and laptops), electric mobility (e.g., electric cars), and utility services (e.g., battery storage plants). Despite being everywhere, lithium-ion batteries have limitations that could constrain their development. Their raw materials including lithium and cobalt are costly and rare. The main sources of these two metals are located outside of the US. As demand rises for electric cars and energy storage systems, lithium and cobalt will be increasingly difficult to obtain and could experience considerable price hikes in the future. Also, the supply gap and scalability are significant issues in using lithium-ion batteries to meet the growing demand from the market for grid-scale energy storage.

Song Junhua, who is the lead author of the WSU-PNNL study and a Ph.D. graduate working at the Lawrence Berkeley National Laboratory, said that the key challenge in developing any battery technology is to simultaneously achieve a high energy density and a long cycle life.

A major part of the WSU-PNNL project involves devising a cathode composed of layered metal oxides and a liquid electrolyte containing additional sodium ions. “Saltier soup” will keep ions moving and thereby prevent the accumulation of salt crystals that obstruct the charging and discharging process.

According to Lin, the project clearly shows that the improvement in surface interaction between the cathode and the electrolyte is closely related to the improvement in the structure of the cathode itself. The layered cathode that was designed by the team delivered the best performance in the record for sodium-ion batteries and demonstrated that this technology is not only viable but can also compete with lithium-ion batteries.

Going forward, the WSU-PNNL project will continue to explore the vital interaction between the electrolyte and the cathode. Gaining insights in this area will lead to the adoption of other materials for better battery designs, especially ones that do not require the expensive and hard-to-obtain cobalt.

Song believes that the project has laid the groundwork for the practical application of sodium-ion batteries. According to him, the prototype reveals a lot about the cathode-electrolyte interaction. This knowledge, in turn, will be useful for creating cathode materials that are low in or free of cobalt. Song also said that finding viable alternatives to lithium and cobalt in the development of cathode materials will enable sodium-ion batteries to directly compete with lithium-ion batteries. Such scenario would be game changing for the battery industry.