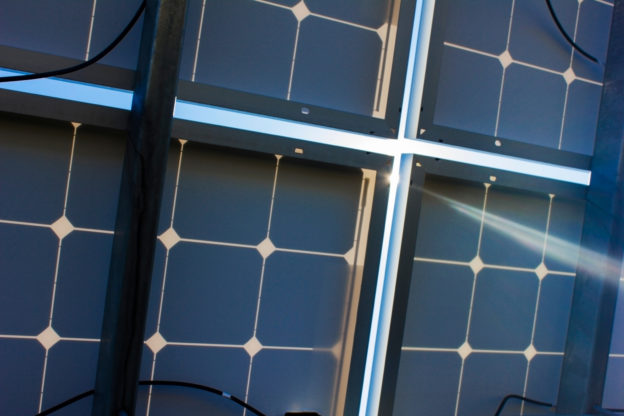 Conventional solar panels are not intended to be in service forever even though they are designed for the outdoor environment and can withstand difficult weather conditions. The life of solar panels (photovoltaic modules) is around 25 years on average. Forces of nature including ultraviolet rays, rainwater, wind, and dust are constantly working to wear down the outer protection of a solar panel. Eventually, the performance of the panel will deteriorate as a result. On the other hand, there are also inherent issues with the design and materials that cause solar panels to fail earlier than expected. For instance, scientists in the US recently discovered that the lifespan of a solar panel can be significantly cut short by acetic acid released from the panel’s own encapsulation material.

Once a solar panel is installed and begins operation, the clock starts to tick for the countdown to the end of its service life. Many factors can accelerate the countdown and impact the performance of the panel. First, the conversion efficiency of solar cells (photovoltaic cells) in the panel will decrease by as much as 2% due to light-induced degradation. This phenomenon, which occurs within the working panel’s first few hours of exposure to sunlight, is attributed to a defect in the silicon substrate of solar cells. Most cells are P-type, which means that they are based on boron-doped silicon. When electric current flows through them for the first time, oxygen atoms inside the substrate recombine with boron atoms. This pairing reduces the lifetime of minority carriers and ultimately lowers the conversion efficiency.

The efficiency loss caused by light-induced degradation may seem insignificant on a single panel, but it adds up when applied to arrays of panels and would be too enormous to ignore under the context of mass deployment. To address this problem, the solar industry has adopted different materials (e.g., N-type cells based on phosphorous-doped silicon). Another solution that can limit the effect of the boron-oxygen pairing is to perform controlled light exposure on newly made solar panels before they are installed and enter operation.

Besides light-induced degradation, scientists have also uncovered many other threats and defects that can ruin solar panels prematurely, perhaps even causing them to fail decades in advance. Earlier this month, the US National Institute of Standards and Technology (NIST) released a report warning about the durability of the plastic backsheets that protect the underside of solar panels. NIST researchers have found that backsheets are prone to cracking and splitting early on, and the formation of this defect is very rapid. While backsheets are never expected to maintain their integrity over a very long period, they appear to be much flimsier than anticipated by the solar industry.

Typically made of polyamide (PA), backsheets provide insulation and physical shielding for the bottom of solar panels. They are generally made to resist ultraviolet radiation, extreme temperatures, humidity, and physical forces. They also should have the tensile strength to withstand stretching and bending. If the backsheet of a solar panel starts to crack, water and air molecules will gradually build up inside the panel and cause damages to the solar cells. Electric current can also leak out from these fissures, thereby raising the risk of electrocution.

Xiaohong Gu, NIST materials engineer and co-author of the report, said that his team collected samples of backsheets from the US, China, Thailand, and Italy during 2010-2012. To their surprise, some samples, while having met all the necessary standards for quality and safety, showed severe cracking and splitting in less than four years of being in use. In fact, premature cracks appeared on most samples that were in use for three to six years.

After a series of mechanical and chemical tests on the samples, NIST researchers also found that areas on backsheets that had become the most rigid also saw the worst cracking. Additionally, the inner side of backsheets was more brittle than the outer side that was exposed to the outdoor environment.

In trying to understand why cracking is more serious on the inner lining than on the outside surface, the NIST team initially surmised that there is an issue with the material that encapsulates solar cells. Specifically, ethylene vinyl acetate (EVA), which is the mainstream encapsulant, can release acetic acid when exposed to sunlight. Also commonly known as vinegar, acetic acid breaks down PA from the inside of the panel and thereby hastening the formation of cracks on the backsheet.

To prove their hypothesis, the NIST team soaked a batch of PA strips in containers filled with acetic acid for five months. Another batch of PA strips were immersed in water as a controlled group. At the end of the period, the strips were taken out and examined under the microscope. The result of this experiment showed that the strips dipped in acetic acid had more and larger cracks compared with the strips dipped in water. Moreover, the analysis of the dissolved PA material left in the container of acetic acid indicated that the higher concentration of the acid, the faster the decay.

NIST researchers hope that their study on this topic will spur the solar industry to include acid-induced cracks as an item to be assessed in the stress testing of products. Their findings, which confirm that backsheets are crucial to extending the service life of solar panels, are expected to make a significant contribution to product design in the future as well. This report has been published in the journal Progress in Photovoltaics.

(News source: TechNews. Photo credit: The US National Institute of Standards and Technology.)